Why has the Council set up this Forum? 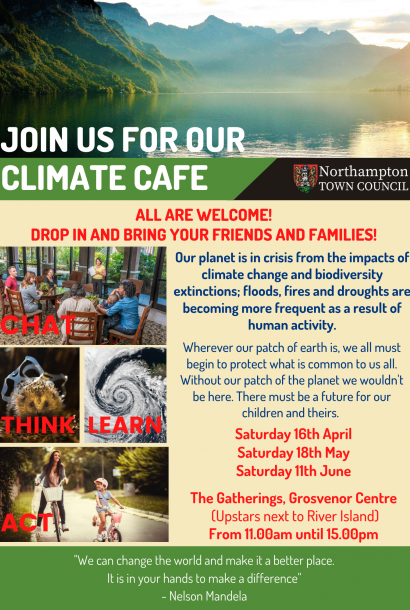 There is now an enormous amount of scientific based evidence for the reality of a warming world, and little overall impression has been made on the gases, such as CO2 and methane emissions, that are the key drivers of global temperature rise.

The effects of Climate Change from local, national and global perspectives, will change the lives of all Northampton's residents, and whilst in the shorter term of, say the next 5-10 years, the effects will probably be relatively small on a local level, on a national level they are likely to be very damaging for some UK communities, and extremely harmful, even devastating for some populations around the world, notably in both those still developing countries that have contributed least to the causes of Climate Change, but also in some countries that have played an enormous part in causing the problem, such as the USA and Australia, where fire and flood have done major damage over the last few years.

As a Town Council, though admittedly with relatively few resources and statutory responsibilities, we believe we should be doing whatever we can to both limit CO2 emissions by our Council, the Town's individual residents, businesses and other organisations. We also have a responsibility to plan for local climate change induced events that could potentially cause direct harm to people and property or for disruption to the well being of our residents by the geographically distant effects of drought, or fire, or life threatening heat, and so on, that nevertheless lead to a chain of events that have local consequences.

For example, food imports to the UK may be disrupted or discontinued, people seeking asylum due to climate change induced disruption of even war in their own countries will aim to migrate to safer areas, including the UK, foreign 'climate wars' may drag in other countries, perhaps especially those like the UK with a history of strategic involvement overseas, and climate caused events within the UK, such as coastal flooding, crop failure, the arrival of novel (to the UK) diseases precipitated by climate change effects, will all potentially add to the local level of upheaval and disruption, and augment that already in evidence from more distant global events.

These Climate Cafes in April - June 2022 were the first public events organised by the Forum. Another Forum activity has been working with 2 groups of students from a local primary school on air quality issues. Further projects being discussed include 'active travel' (encouraging more walking and cycling for short journeys), placing a sustainable wild flower planter on Abington Street, and we shall soon be launching a 'climate change' grants scheme.