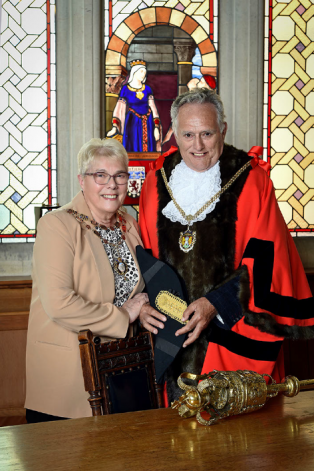 On Monday 16th May 2022, Northampton Town Council held its second Annual Council Meeting - also known as the Mayor Making Ceremony. During the ceremony, a word of gratitude was extended to outgoing Mayor, Councillor Rufia Ashraf, for an outstanding year.

Councillor Dennis Meredith will assume the title of Town Mayor, appointing his wife Rona Meredith as his Mayoress. Cllr Steven Hibbert will assume the role of Deputy Mayor. It was also decided at the meeting which councillors will serve on the various committees and sub committees that manage the Council's business.

Cllr. Dennis Meredith, the 782nd Mayor of Northampton, was born in Islington and moved to Northampton in 1972, where he has been proud to call home ever since. Himself and his Mayoress, Rona, celebrated their golden wedding anniversary last year. Throughout the 50 years they have shared, they have enjoyed two children and now, five grandchildren.

Previously, Cllr Meredith worked as a care taker for Lings Primary School for 32 years, before retiring from his position in 2007. Two years later, he became a Councillor for both Northampton Borough and the County Council. During his political career, Cllr Meredith has been responsible for setting up youth clubs and residents associations across Northampton. He currently serves on West Northamptonshire Unitary Council for the Liberal Democrats, where he was previously the Deputy Leader, as well as, representing the party on Northampton Town Council.

Cllr Meredith is an avid gardener with a passion for his allotment – he campaigned tirelessly in his ward for allotment space and is always keen to support those with green fingers.

You can view the Gallery here

You can book Cllr. Meredith for an engagement here.

Please kindly provide us with the information for your invitation to the Mayor on the form below.
Once completed, click submit.
Please check your emails to make sure the form has been submitted - if you do not receive confirmation please re submit your form as there may be missing information.
Please note, we require a minimum of two weeks notice in order to consider your engagement.

If your event is outside of the Northampton Town boundary please call Lizzie Hawkins, Civic and Mayoral Officer on 01604 349323 or email mayor@northamptontowncouncil.gov.uk and we can see if we can facilitate.