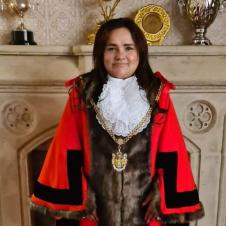 Councillor Rufia Ashraf, the Chair of the Shadow Northampton Town Council has, from 1st April 2021, assumed the title of Town Mayor. She succeeds Councillor Brian Sargeant who was Mayor until the devolution of the Borough Council on 31st March.

Cllr Ashraf is dedicated to local democracy and fairness, she loves a challenge and to influence change. Cllr Ashraf's mission statement as Mayor is; "a Cleaner, Greener, Safer Northampton". She hopes to raise awareness of climate change and the issue of litter. When not serving the people of her ward in St James, and afar, Cllr Ashraf loves to spend time with her family of three young children and her husband Abu. When she has the time in her busy schedule Cllr Ashraf loves to read and go for walks in the beautiful Northamptonshire countryside.

As well as the office of Mayor, the town's proud civic heritage, events and traditions have also be transferred to the Town Council which will continue to honour these events and much more with a new dedicated team of Officers.