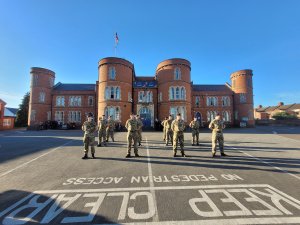 Armed Forces Day is celebrated nationally on 26th June every year. This years celebration coincided with the centenary of the Royal British Legion, as well as, the 100 year Anniversary of Northampton's own branch of the RBL. Due to Covid regulations, the usual parade and procession unfortunately did not take place this year and instead we took the celebrations online. Footage included contributions from The Lord Lieutenant James Saunders Watson, an interview with commanding officer Lt Col Emil Tessen Cotton, exclusive footage of a 118 Recovery Company exercise filmed at Clare Street Barracks under the Command of Lt Colonel Robert Blomfield and of course messages from The Northampton Branch of the Royal British Legion, as well as, our other local Armed Forces Charities.

The Mayor Councillor Rufia Ashraf said: "Armed Forces Day is always a really popular event in the town, providing people with a fantastic opportunity to show how proud we are of our Armed Forces, past and present, we are happy to be celebrating the RBL's centenary on line and hope you can join us! We are so deeply saddened that we can't have a parade this year however we can still show our support on line, we are hoping that next year our parade will be bigger and better than ever."

Phillip York, Chairman of the Northampton Branch of the Royal British Legion, said: "As always, we encourage as many people as possible to join us online, to support the troops, hear from our charities and enjoy the entertainment."

You can watch the video at: