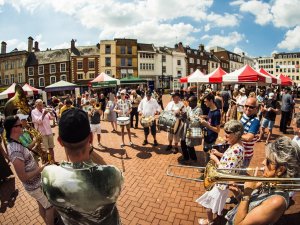 The Grants Sub-Committee of the newly formed Northampton Town Council this week (3 August) recommended a grant award to the Northampton Music Festival (NMF) of £5,000 from its Community Grants budget. This is in addition to the already agreed £10,000 that the Music Festival has traditionally received from the Borough Council.

The NMF which has been an annual event in the town since 2007 could not be held last year due to the pandemic, and sub-committee members were keen that it returns stronger than ever in 2021.

The town council funding will enable to the NMF organisers to have additional stages and artists at the festival which takes place on Sunday 5 September in the town centre. It is estimated that the event attracts around 10 thousand people.

The annual art project, Wall Games, was also awarded funding to work with local artists to create bright and colourful murals in forgotten areas of the town centre. In the past these murals have reduced fly tipping and unwanted graffiti giving local people a sense of pride in their neighbourhood.

A number of projects supported by individual councillors were also awarded funding to benefit their Ward residents.

Cllr Jane Birch, Chair of the Grants Sub-Committee stated that 'we as a town council want to play a key role in supporting these important events that really benefit residents, attract people to the town and boost the local economy. NMF, in particular, is long established with a dedicated group of volunteer organisers led and we are pleased to be able to offer our support in ensuring that this festival remains a key event in the Northampton calendar. It is great to see this and many other events taking place following the past 18 months we have all lived through'.