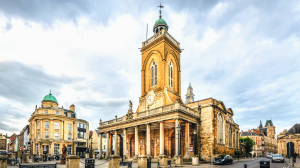 Councillor's heard of the benefits other towns have had from becoming cities, both economical and in terms of civic pride and profile. Councillor's heard how Northampton met all the criteria with the addition of a university and really was 'a city at heart'.

Seconding the proposal to back the city bid Cllr Mike Hallam said he saw this as an opportunity to talk up all that is great about our town of Northampton. Cllr Hallam said 'It gives us a fantastic opportunity to showcase all the wonderful organisations, businesses, clubs, sports teams that are here in Northampton. Many people don't know what amazing work these people do in our town and this bid will highlight that, not just locally but to the nation as a whole'. Cllr Hallam added that the Queen's Platinum Jubilee year, was a fantastic occasion for Her Majesty, and could also be a wonderful occasion for Northampton.

The Council as a whole stated that this bid was not just about the rich history, but also about the future, and that we as a Town Council on behalf of Northampton wanted to be ambitious, forward thinking, and aspirational. The Town Council also wanted to enhance the lives of our residents and that city status could act as a springboard.

Presiding over the specially convened meeting was the Town Mayor, Cllr Rufia Ashraf, who expressed her pride that she was in the Mayor's seat when this proposal was debated. Cllr Ashraf stated 'I am proud to be Mayor of Northampton, even prouder of the town of Northampton, and I am extremely pleased that we as town council wholeheartedly voted to back the bid for city status for Northampton'.

The Town Council will now officially submit its supporting statement to West Northamptonshire Council as part of their final portfolio.