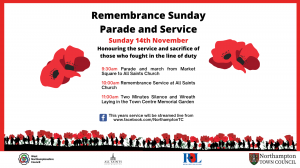 This year Northampton Town Council will be leading Remembrance Day Commemorations on Sunday 14th November in the Town Centre with a Parade, Civic Procession and Services at All Saints Church and the Town Centre Memorial Garden. This year will mark the Centenary of the Royal British Legion.

The Parade, starting at the top of Abington Street at 09:30, will be led by local Military and the RBL, and will include Northampton's Veteran's and Cadets as well as other local community groups.
The Divine Service at All Saints Church led by Father Oliver Coss will begin at 10:00. Visitors are recommended to contact the Church to make sure a seat is reserved as some social distancing measures will remain in effect.
Following the service, the public are invited to gather safely near the Memorial Garden where the last post will be performed and wreaths from local Dignitaries and community groups will be laid accompanied by Abington Wind Band. The Parade will then march past The Guildhall where the Lord Lieutenant Mr James Saunders Watson Esq and The Mayor of Northampton Town Cllr Rufia Ashraf will receive the salute. The Memorial Garden will remain open for the public to pay their respects.

Attendees on the day are recommended to observe sensible social distancing measures. For those who are unable to attend, the Service will be streamed live from All Saints Church and can be viewed on the Northampton Town Council Facebook page and the All Saints Church Facebook page. This year there will once more be a commemorative Northampton Remembers film release on the day this will feature contributions from local schools, care homes and residents. If you would like to contribute this year please email Remembrance2021@northamptontowncouncil.gov.uk for further information.

The Mayor Cllr Rufia Ashraf say's "We are incredibly lucky to be able to hold a parade and honour our fallen soldiers this year. We at Northampton Town Council are proud to lead this event not only to commemorate those who have tragically lost their lives in war but also to honour the Royal British Legion – one of their first branches was formed here in Northampton 100 years ago and they still perform such important work for our service men and women to this day."