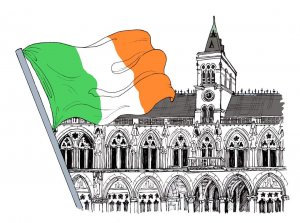 Together, with the Northampton Irish Support Group, Northampton Town Council raise the Irish Tricolour Flag in honour of St Patrick's Day. The Flag raising will take a place a day early, on Wednesday 16th March and remain in mast for the St Patrick's Day. This is to coincide with the launch for "Stories of Migration". A collection of published stories about how Irish families migrated to Northampton from 1920s onwards. The Mayor of Northampton, Cllr Ashraf will welcome the group to the Mayor's Parlour for refreshments after the Flag raising. Free magazines will be given out throughput the day.

Cllr Mike Hallam, who was part of the project said "this has been a fantastic project to be involved in, the Irish community has made a significant contribution to life in Northampton over the last 100 years. My own grandmother came to the Northampton in the 1940s. It's great to get all of these stories written down and captured in print".