Our thoughts are with the Royal Family following news that Her Majesty, Queen Elizabeth II, has passed 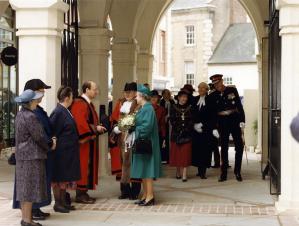 "It has been announced by Buckingham Palace that Her Majesty Queen Elizabeth II has passed away.

The Town Council and the people of Northampton are deeply saddened to hear the news of the death of Her Majesty. Our sincere condolences go to family members''.

Her Majesty Queen Elizabeth II, first visited in 1965 as a reigning monarch, along with her late husband the Duke of Edinburgh. She was met with cheering crowds as she drove through town. Her signature still remains in the Visitors' Book in the Mayor's Parlour of the Guildhall today.

In 1982, the Queen visited Northampton again to open the Express Lift Tower and view the Royal and Derngate which previously had not warrented its title of 'Royal' having never been given royal permission. However, following the Queen's visit in 1982, the name was finally justified.

A decade later, the Queen visited once more to open the new extension of Northampton's Guildhall, in 1992. She dined with notable locals including the Mayor, Councillors and the Bishop of Peterborough. They dined at the Guildhall and ate dishes such as Paté of Smoked Trout and Mackerel, Pot Roast Pheasant with Claret and Orange Sauce, followed by a Soufflé Grand Marnier, all finished up with tea and coffee. During this royal visit, the Queen also opened the new school site for Northampton High School. To mark the occasion the Queen planted a tree in the Cripps Courtyard.

Further information will be provided in due course.