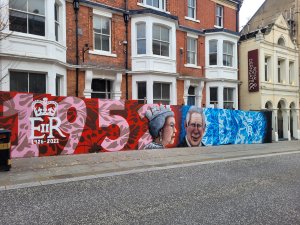 The mural was designed to both commemorate the reign of Queen Elizabeth II and look ahead to the future reign of His Majesty the King, Charles III. The project was generously funded by Northampton Town Councillor, Cllr. Nazim Choudary, through our Councillor Community Fund.

Councillor Jane Birch said, 'It was with great sadness that we heard of the passing of Queen Elizabeth II shortly after all the celebrations of her Platinum Jubilee. The accession of King Charles III starts a new chapter of our monarchy and the Town Council thought it fitting to mark such an historical occasion with a visual tribute, in the form of this mural, to our past and future monarchs.'

The county's representative of the King, Lord Lieutenant Mr James Saunders Watson Esq said of the project, "I am delighted that the Town Council have commissioned this mural to the passing of Her Late Majesty Queen Elizabeth II and the accession of King Charles III."