Remembrance 2022: How will the Day be Commemorated Here in Northampton 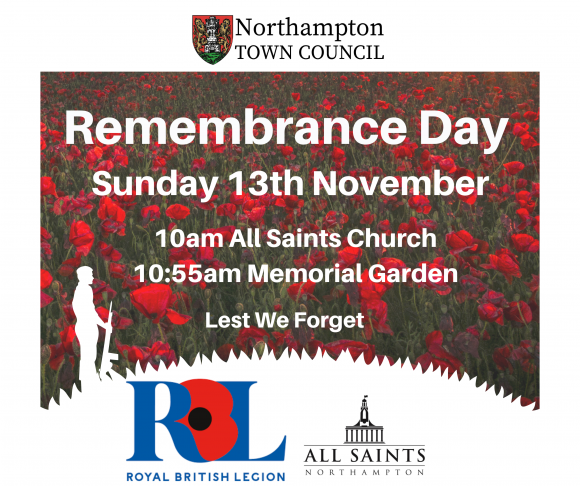 Northampton Town Council, in partnership with the Royal British Legion (RBL), will be leading this year's Remembrance Sunday Commemorations, to be held on 13 November, in the town centre. The day's events will commence with a parade and civic procession, prior to the Divine Service at All Saints' Church. A service in the town centre Memorial Garden will follow, where wreaths will be laid by local dignitaries and community groups.

The parade, led by the Northampton Pipe Band, will step off at 0930 from the Market Square and process to All Saints' via the Drapery. The parade will consist of local Standard Bearers, veterans, the F5 Squadron Air Training Corps band, military cadets, Emergency Services Ceremonial teams and children from local community groups, including the Boy's Brigade, Brownies and Guides.

The Divine Service, taking place at All Saints' Church will begin at 1000. It is advisable for the public to arrive early to make sure they have a seat. For those who can't be in attendance on the day, the service will be live streamed via the All Saints' Church Facebook and YouTube channels, at Facebook.com/allsaintsnorthampton or YouTube.com/allsaintschurchnn1

Following the Divine service at 1045, the public are invited to gather safely near the Memorial Garden, where the last post will be performed and the two-minute silence is observed. Wreaths from local Dignitaries, members of the RBL and local community groups, will then be laid on the Cenotaph. The Memorial Garden will remain open for the public to lay wreaths and pay their respects.

Following the Memorial Garden service, the parade will march past The Guildhall, where the county's representative of the King, Lord Lieutenant Mr James Saunders Watson Esq will receive the salute.

The Mayor, Cllr Meredith said "The ABF - Army Benevolent Fund is one of my chosen charities during my term as Mayor. This is due to the immense respect and admiration I have for the Armed Forces. We, at Northampton Town Council, are proud to lead this event not only to commemorate those who have tragically lost their lives in war buy also the ongoing effects of our Armed Forces and the Royal British Legion, not only in our community, but nationwide and globally".

This year, there will once again be a commemorative Northampton Remembers film release on the day. This will feature contributions from local schools, care homes and residents. If you would like to contribute this year, please email mayor@northamptontowncouncil.gov.uk for further information. The video will be available on the Northampton Town Council and Mayor of Northampton social media pages.